When I am in the field, I typically have a mental list of pictures that I hope to get -- but on any given day I rarely get what I expect. Nature is unpredictable that way, and that is an essential part of its gift, the ability to offer surprises.

I spent a lot of time waiting today while the tropical rain came down in buckets.  In fact, I spent a full 10 hours waiting for the Cassowaries to return after an early morning visit. But I wasn't idle : I amused myself with shooting pictures of other birds that were feeding around the camp. This little Emerald Dove, the size of a chubby robin, was feeding on the forest floor and I found that if I held quite still, he would come close. Because it was so dark under the clouds and canopy, I had to use a flash. But every time I did, the little dove would be startled enough to put his wings out as if to fly away. The amazing thing was that his reaction time was so fast that he reacted to the flash before the shutter opened - and I got a picture of his wings already extended. Talk about fast reflexes! 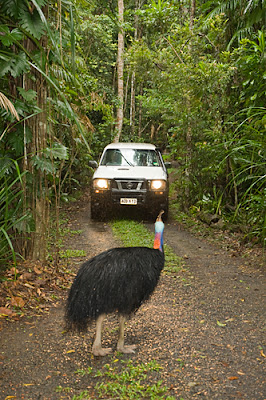 Then, at the end of the day, I was photographing a Cassowary feeding on the road - when a car came around the corner and into my picture. My first reaction was annoyance - but then I realized that this was also a gift: neatly illustrating the fact that Cassowaries are killed every year on roads like this. This was a shot on my list, but one I figured would be hard to get. In the end, it just happened... Sometimes it just works like that.
And finally, just a nice shot of a common bird, the Australian Brush Turkey.  Not bad for a soggy day in the forest. And I have NO idea what I'll find tomorrow. 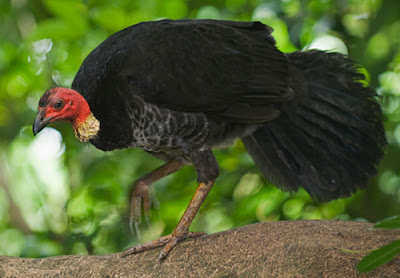