OK, he's probably only having a stretch (you get kinda stiff sitting on a nest that's buried under 2 feet of snow).  But this is just one of a host of penguin images that might make it into my new (old) book Penguin Planet. I have just signed a contract to produce a revised edition this year, with loads of new pictures, and the latest information on how penguins are affected by global warming etc.  Should be a fun project. No plans to head south and get new material, though, until after the book is out. I'll be back in Antarctica in early 2013 - details on that later.

The other news is that I have just taken ownership of the new 36 MP Nikon D800. Really, I couldn't resist a camera that shoots the equivalent of medium-format resolution, as well as HD video... Yes, I'm weak...

Motion-sensor activated camera traps are great tools - they sit patiently all night waiting for activity, and then spring into action, capturing behavior that the photographer never saw. There are hitches, of course: when the wind blows every blade of waving grass can trip the sensor so that you get hundreds of pictures of grass - in a variety of poses.

Here, I set up a trap at the entrance to an active fox burrow, hoping to get glimpses of young pups. Boy, did I ever... They burst out of the burrow and, like all kids, ran around like mad for the next hour. Composition? Forget it?  Nice, graceful, "feng shui" arrangement? Nada. Of the nearly two hundred shots I got that night, almost all were unusable and, as you can see, this was deftly cropped to create a composition out of a madcap romp of pups headed in every direction. (That's Mom or Dad in the background, keeping an eye on things) 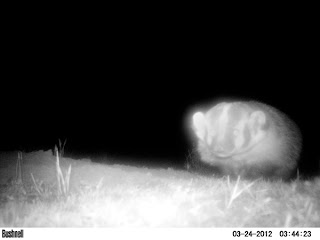 You have to love camera traps. These tools allow the wildlife photographer to extend their reach into the world of rare and nocturnal animals, creatures that are almost impossible to photograph in the daytime.  No surprise that I have been employing them for my coverage of Kit Foxes in southern California.  It has taken me several days to locate the foxes, and determine which dens were active, and to get my cameras set.  Already I've had some near-misses, and some complete misses, in my search for pictures.  Witness this shot of a wild fox, passing by the camera and proving, once again, that these tools are not flawless and require A LOT of exposures to get one that works...

But the funniest (sort of) of the shots I got involved a the very strong winds that blew in from the Pacific over the last few days. I had set the camera up at what I knew was a busy fox den, looking forward to getting shots of them coming and going. As it happened, however, a powerful storm hit overnight - and the gale-force winds plastered a big tumbleweed right up against my camera trap.  With my motion sensor activated, every time the tumbleweed jiggled in the wind, I got another frame... In the end, I came away with 134 close-ups of tumbleweeds, and no foxes... Gotta love it...

Yes, I normally post pictures of animals taken in exotic locations worldwide. When I am home, I am normally behind a computer, editing or planning my next expedition. But every now and then I am lured into action by animals closer to home: in this case about a hundred yards from my house. As I went out this morning, I noticed a flock of Brant geese feeding along the edge of the beach and ran to grab my camera.
These small birds - like miniature Canada geese - pass by here every year en route to their breeding grounds in SW Alaska. They stop and rest and feed on eelgrass (their favorite food) along the shore.  Although hunted in the refuges where they breed (the name "refuge" being something of a misnomer), they are quite accustomed to people and cars along Alki Beach below our house, and are MUCH easier to approach here than they are in Alaska. I set up my tripod and my 500mm lens and started shooting, inching closer with every few shots, thinking I was in a good spot to capture some interesting behavior.
In the end I only got 4-5 minutes before the entire flock of 30-40 birds took off en masse. No, it wasn't me, but a pair of Bald Eagles passing overhead. These B-52's of the bird world were enough to send these little geese up: they never returned. This simple shot of one calling along the shore was the best I got; I just hope they come back tomorrow.

OK, I have made several false starts on Facebook before, but now have decided to step firmly out of the Dark Ages and embrace the inevitable. The enormous, global reach of the site is hard to ignore : I am hearing from people in India, South America and my own backyard - people who might never stumble onto this humble blog.

So I am pleased to announce that I will now be posting on Facebook as "Kevin Schafer Photography" - come visit anytime!  I will, meanwhile, keep this blog going whenever I can.

Meanwhile, this is a portrait of an adult wild Cassowary in northern Queensland. I was shooting from a raised platform, which explains the unexpected angle. To be honest, these birds were being unexpectedly aggressive during my last visit - so I was playing it safe...