A Sea of Birds 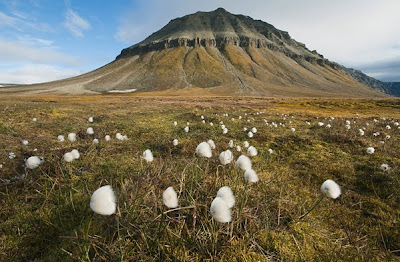 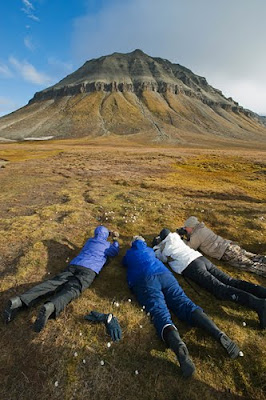 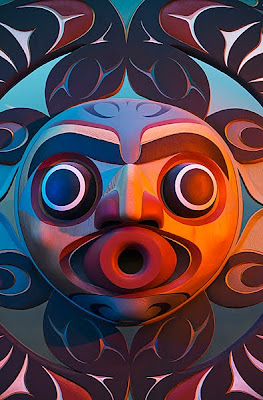 Coast Salish Mask: Susan Point, Artist
I spent the last two days at an International Seabird conference in Victoria BC, celebrating beautiful fall weather in a windowless auditorium... Worth it, though,  to connect with old friends - seabirds - with whom I started my career thirty years ago.
Not many photo opportunities, though. However, I was taken by this ornamental mask done by Coast Salish artist Susan Point, which decorates the Victoria Convention Centre, where our meeting was held. It is a terrific piece of art, enhanced by some pretty nifty lighting, so I have to say - I couldn't resist.
In the meantime, I head out to do some real field photography this weekend, whatever the weather.
Nikon D300, 18-200mm lens and some spiffy ambient light.
Posted by Kevin at 6:29 PM No comments:

The Top of South Georgia 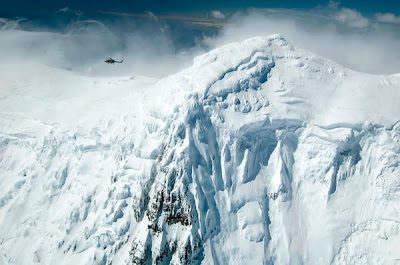 Helicopter and 9629' summit of Mt. Paget

I am often asked which is my favorite place in the world. Ignoring the fact that this is like asking a parent which child they prefer, I would have to say the island of South Georgia. Physically, it is an astonishing place - as rugged and imposing a mountain landscape as any on Earth - but this is all just a backdrop to one of the greatest gatherings of wildlife on the planet. All in all, an amazing place.


I had the very good fortune a few years ago to travel to South Georgia with the UK Royal Navy research vessel Endurance. One of the highlights of that 3-week journey was the chance to fly over most of the island in one of their helicopters. Particularly memorable was our landing on the icy summit of the island's highest peak, Mt. Paget, on a stunning clear day when the entire island was visible.


In this picture, taken as we approached the summit, you can see another helicopter having just taken off, amid the swirling wind and snow. The image has never been published before, but it brings back some incredible memories.


I will be back on South Georgia later this year (although not at this altitude!) serving as the National Geographic photo lecturer aboard the "National Geographic Explorer". For more information about the trip, click HERE. Or feel free to write to me with any questions you might have.
Posted by Kevin at 8:56 AM No comments: 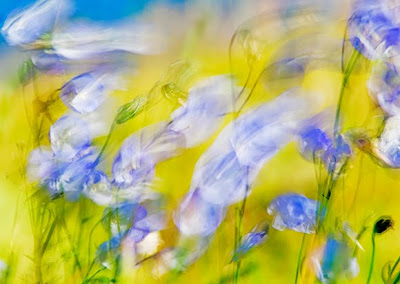 Harebells in Wind, Lofoten islands, Norway
One of the great gifts of digital photography has been its
encouragement of experimentation. With film, I would shoot
a roll of film of a low-percentage shot (think wind-blown
flowers) and then quit – just to save film. It was a
total crap shoot whether you actually got something or not!
Now, by contrast, you can shoot all day on a 16 gb card:
and check your work along the way.
I haven’t made up my mind about this shot yet – and that’s
just fine. I took it on a sunny arctic mid-day when there simply
weren’t any other decent pictures to be made – too bright,
too windy, too whatever. The kind of day, in fact,
when I should probably have put the camera down and literally
stopped to smell the flowers. Fair enough…but I couldn’t resist
these dancing harebells. So, I braced the camera on a rock
and shot a pile of them at various slow speeds, quite literally
painting with color. Most of the resulting images are
junk – and maybe this one is, too – but it was a fun, spontaneous
process.
And for that, and for a picture I could have easily walked past,
I am grateful.
Nikon D3, 70-200mm lens  1/8 sec
Posted by Kevin at 7:19 PM 2 comments: 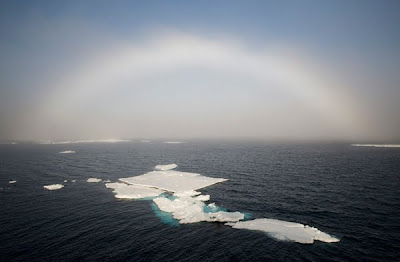 Fogbow and Pack Ice, 80 degrees N.
We were hunting for polar bears - a distinct challenge in the intermittent fog.  But the mist did give us one unexpected gift: a fogbow. Caused by the same phenomena that cause rainbows, fogbows are more diffused, and are typically colorless.
A wide-angle lens captured the fogbow, but I struggled to find a foreground to complete the composition.  There were images where the ice was better "arranged", but on those the fogbow was broken or less pronounced. In the end, I settled on this one, which shows the arc beautifully, even if the ice is a little scraggly.  Nature rarely performs precisely on cue.
Nikon D3, 17-35mm lens
Posted by Kevin at 10:03 AM No comments: