I have been in Bakersfield, California this week, looking for endangered
San Joaquin Kit Foxes.  Foxes in the city?  Yes, in one of the most
unexpected of situations, these rare foxes are holding their own living
in the middle of the city, in some cases better than they’re faring in
the surrounding agricultural land. As one biologist told me, kit foxes
are better off in an empty lot than a farmer’s field. The lot has good
places to den, and access to the varied diet the city can offer : hot
dogs,candy, and maybe the mice that feed on them.


After searching for an active den for several days, I stumbled onto
this family at dusk last night, emerging from their den – under a
cracked city sidewalk.  The mother appeared, followed – to my delight –
by two small cubs, playful and curious. I went back again this morning
and had a few minutes with them before they went back down into
their den to sleep the day away. (Kit foxes are primarily nocturnal).


But the challenges facing these urban foxes became all too clear
when I returned again tonight. To my horror, the street where I had
photographed the foxes just this morning was now under construction,
with workers jack-hammering the pavement only a few yards from the
den.  I quickly made sure they were aware of the den’s existence and
asked that they try to minimize the disturbance of that part of the
street, but after they all left, and darkness fell, I saw no sign of the
foxes.  I’ll go back tomorrow and check on them.


The urban foxes of Bakersfield make a dangerous bargain : they get
plenty to eat and enjoy the lack of predators. But they also have to
contend with road crews, lawn mowers, cats and dogs,and a city full
of cars. I hope they make it.
Nikon D3, 200-400 f4 lens
Posted by Kevin at 8:19 PM 1 comment:

The loss of life in Japan from the Earthquake and Tsunami has been absolutely horrific, and the potential damage from the continuing nuclear disaster is unimaginable. Like many of us, I have been deeply moved by the devastation.

One small story I missed, however, until a friend sent me this link, was the effect of the tsunami on Pacific Islands. The waves, spreading out over the Pacific, easily overran many small islands that may rise only a few feet above the level of the surrounding ocean.  One such place is Midway Atoll, home to one of the most important seabird colonies in the north Pacific. Thousands of albatrosses were killed when the waves swept over these flat, sandy islands, just as chicks were getting ready to fledge.

Albatrosses are long-lived birds, so despite a catastrophic wipe-out of this year's chicks, most of the adults will be back again next year, including "Wisdom," a female Laysan Albatross known to be 60 years old.  But since this is a place I know well, having been there several times in the past decade, I was shocked to hear of the damage. The fact is, there are probably similar stories from many other islands still not heard from across this vast ocean, including many with  human inhabitants.
Posted by Kevin at 5:11 PM 1 comment:

Got a nice piece of news today. This shot of Amazon River Dolphins (Botos) that I took for National Geographic in 2009 was included in their "50 Greatest Photographs" collection - now available (for sale) on the iPad.  There is always a bit of hype to these sorts of things, but whatever you think of the concept, I'm still honored to be included.  You can see the app HERE.

(Be warned, there are a number of complaints that the $4.99 app includes advertising)

Meanwhile, to read more about this picture, take a look at my Outdoor Photographer blog entry from last year - HERE.
Posted by Kevin at 6:34 AM 5 comments:

During our recent aurora trip, we typically spent the daytime exploring the winter landscape around where we were staying - a chance to get out and get some exercise, and occasionally find some pictures. The middle of the day was normally not the ideal time for photography, however, and I often didn't even carry a camera.  So when we stumbled onto this cluster of frozen grasses, I wasn't prepared: But I liked it so much that I came back - with camera - a few hours later.

One of my companions dismissed the scene as being too "artsy" - a cliche - but I always enjoy playing with the pure design, composing pictures using only the most basic of visual tools : line and shape.  My friend Steve and I spent half an hour playing here (there's no other word for it) until the setting sun sent deep tree shadows across the area, and the cold drove us back toward the lodge.

Is it Art?  Who knows?  But it was a half hour spent quite happily in Nature, and for that I'm always grateful. If it hadn't been 35 below zero, I could easily have spent all day here.

Nights on the Job

My good friend Steve, who has been with me here in Canada all this week, took this shot of me photographing the aurora Thursday night. One thing I learned from this : you get COLD holding still for 45 seconds at 40 below...  But it's a picture I'm happy to have - thanks, Steve.
Posted by Kevin at 10:02 AM 2 comments:

Last night was our final one at Blachford Lake, and it didn’t disappoint.
After a slow beginning at 7:30 pm, the lights really got going 3 hours
later with a dramatic burst of activity that had everyone outside and
gaping skyward.  It has been a spectacular week, full of splendid
weather, great company, and a nightly aurora show that qualifies
as one of the best and most consistent I've ever seen. 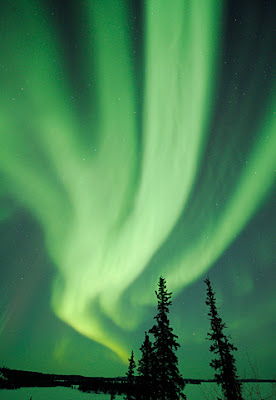 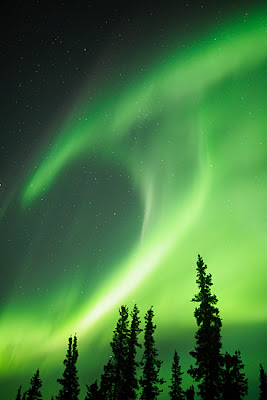 The sky was quiet tonight. Although the first aurora appeared just after dark, it was largely immobile - or in the words of one of our Aussie mates here, "Nothing but smudgy smudges."  Then, at about 1 am, after most of us had given up and gone to bed, the sky exploded. For half an hour or so, the lights danced across the sky in a brilliant, shimmering display. The lights moved so quickly, in fact, that they were hard to capture. Then, abruptly, it ended, and the rest of the night held nothing but "smudgy smudges."

Who knows why the lights can burst into action so suddenly, and just as suddenly melt away. But it makes predictions, and photography, a challenge.

Tonight is our last night here after a stunning week of nightly aurora. It has been the best, most consistent, viewing (and weather) I've ever had in all my years of aurora-chasing. No, we have not had any of the rare, and sought-after, red auroras or even much besides green - but I'm not complaining.  We'll save that for next time.

Sometimes you just don't feel like getting all dressed up and going outside in the -20 C. cold. As a productive alternative, it's fun to try and find pictures inside where it is snug and warm. An obvious place to start is on the frost-covered windows around the lodge.  We woke this morning to a wonderful pattern of ice crystals on the window of our room, and I spent a happy hour before breakfast making pictures while still in my pajamas. 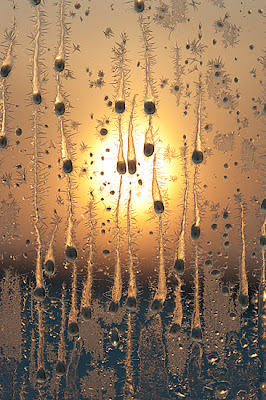 The evening began with very high expectations : the forecast was for clear skies, and the aurora predictions were for another busy night. And when the first lights appeared early - about 8 pm - we settled in for what we thought would be a long, busy night.

Then began what can only be called the "dressing ritual", the donning of multiple layers of clothing: hats, scarves boots, gloves, over-gloves and over-mittens. (At -35 C., you need to be pretty well-padded to spend the evening standing around outside.)
For an hour or so, there was a lot of activity, with waving bands of green filling the sky. Loops formed and then untied themselves, and fleeting curtains of dancing light appeared and then, just as abruptly, vanished.
Green is the most common color in the aurora, the result of the excitation of oxygen molecules high in the atmosphere caused by incoming charged solar particles. Other colors - red, purple, violet - are possible, but are more commonly associated with stronger solar events. Some of these are not visible to the human eye, but are recorded by film and sensors. So it was not until I had a chance to open images on the laptop that it became clear that tonight's lights did not have some of the red tinges of previous nights.
Whether or not that itself was a kind of indicator of diminishing activity, the lights faded quickly before midnight, and never really re-formed for the rest of the night. What was supposed to be a Big Night, became a quiet evening, and a chance to catch up on some much-needed sleep.
Today, meanwhile, the skies are clear again, and expectations are as high as ever for tonight.  In about 12 hours, we'll see what happens. 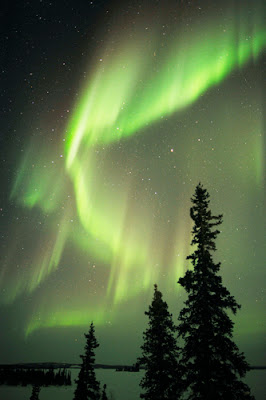 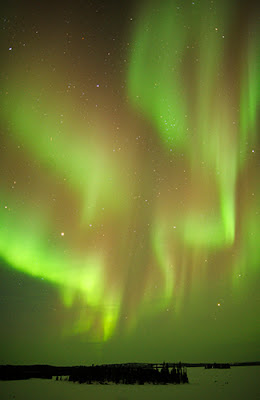