This is a typical situation; just home from one trip with two days before I head overseas. No time to edit the last shoot, and I'm off for a month in Europe. This happens a lot, and is testimony to how easy it is to fill a calendar with no realistic idea of how long things take...

In any case, the edit of my Kit Fox pictures will have to wait now until June.  I did, however, manage to process this little nugget (OK, it's about 4 feet high) late last night, and although it is a simple picture, it works for me. It is of a single, colorful quartzite boulder in the Carrizo Plain during a gentle sunrise.  I liked the shape, the pattern, and the soft colors.

Meanwhile, I leave in the morning for the east coast, followed by a month-long series of cruises to the Azores and around the British Isles for National Geographic; I will serve as photography lecturer on board.  I will try and blog as best I can while en route, and talk about locations and images I encounter.

I am just home from a week in the Carrizo Plain of Southern California, where I spent a week trying to photograph wild, endangered San Joaquin Kit Foxes. I had been with the urban population of these foxes a few weeks ago in Bakersfield, but this was my first experience here, in one of the last scraps of their prime habitat left in California.
I had been to the Carrizo once before many years ago and frankly, I thought it was a bit barren and unappealing. This time, however, our visit coincided with the full flush of Spring; birds were nesting and calling everywhere,  flowers were in spectacular carpets - and the foxes were very cooperative.
This relatively small, and little-known, National Monument protects a precious remnant of the ecosystem that was once found throughout the entire San Joaquin Valley, and is now mostly lost to agriculture and development. The Carrizo nearly disappeared, too, when, oil was discovered in nearby Taft, California in the early 1900's. That wasteland of wells, pipes and barren ground could all too easily have been the fate of the Carrizo, were it not found that the oil deposits there were buried too deep for economical extraction.  Thank God!
Anyhow, here is a quick shot of a kit fox family: I am still editing, and plan to go back again for more as part of a long-term life history project.

Spring in the Northwest

It's almost here. Of all the seasons, spring is the most showy here in the Pacific Northwest, when everything explodes with green. It is the annual reward for suffering through the gloom of winter - and this year has been particularly gloomy!

I always plan at least one or two local trips every year in May and June, returning to some of my favorite haunts: the Olympic coast, the rainforest, and the eastern slope of the Cascade Mountains.

In fact, I list my favorite spring destinations in the May issue of OUTDOOR PHOTOGRAPHER magazine.  Have a look here.

I am often asked one question : what is my favorite place in the world?  The question is understandable, since I travel a lot, but summoning an answer is surprisingly difficult. After all, it would be like picking your favorite child... To be honest, I am fascinated by almost every natural ecosystem on earth. Rainforests, polar icecaps, deserts - all are complex, dynamic, and rich environments. How could I pick one over all the rest?

However, if asked about my favorite wildlife experiences - the answer is easy. I have a top three: swimming with Humpback Whales, following Cassowaries through the Australian forest, and my all-time favorite: sitting with Mountain Gorillas in Rwanda.  Why gorillas?  Because you simply cannot spend any time in their company without changing every notion you might hold about the imagined animal-human divide. These are not mindless automatons - they are gentle, loving, and yes, thoughtful creatures with whom I felt an immediate bond. To watch gorillas at play, or disciplining their young, or simply staring into space, is to feel a kinship unlike anything I have ever felt with a wild creature. Simply said, being with them is a life-changing experience.

Needless to say, therefore, when I was asked to lead a Gorilla photo-safari to Rwanda in 2012, I leapt at the chance.  The trip combines two days of gorillas-trekking with several days in Kenya's extraordinary Masai Mara.

If you would be interested in joining me, let me know and I'll send you more information. Personally, I can't wait. 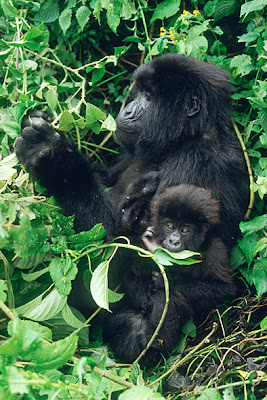