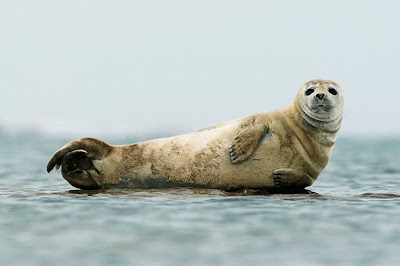 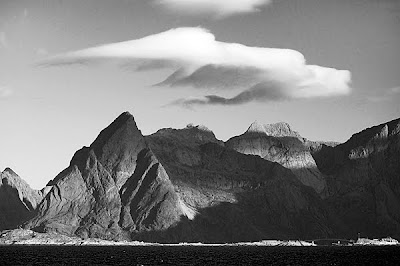 Sunrise on Lofoten Islands, Reine, Arctic Norway
OK, I'll admit it.  I'm on a black and white kick. But since color is so sparse at these latitudes - where the world is largely one of rock, water and sky - many of my images looked frankly better in B&W than they did in color. The beauty is that you can have it both ways, by shooting in color and then comparing the results to a desaturated version.
In this instance, there was literally no color in the stark granite crags of the islands, and precious little color in the sky. This is still far north of the Arctic Circle, where the sun remains above the horizon for 24 hours. This means no sunsets or sunrises, and none of the saturated color effects that gladden the hearts of photographers. Black and white, on the other hand, reduces the landscape to its essentials. 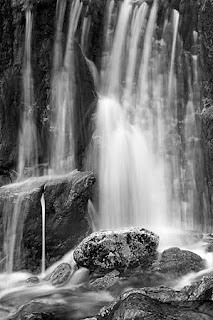 Waterfall, Tromso, Norway
As a former assistant to Galen Rowell, I have spent a career chasing
the light – staying up late and getting up early for untold sunrises
and sunsets. (As photographers, we seem to have an obsession with
the color red, as in sunsets and slickrock) So it is a bit of a revelation
to suddenly fall back in love with black and white – it’s sculptural
forms and visual grace. And now, with digital, it is all so much easier
than the days of Tri-X and Agfa paper, fixer and stop bath. I applaud
those photographers still working with these classic media, but I am
re-discovering my roots through the new media.
I shot this small waterfall this morning in arctic Norway, drawn by
the counterpoint of rock and water.  I shot it in color, of course, but
have now made a habit of looking at nearly every image with the
saturation dialed back to zero. Many are not improved (icebergs,
I have discovered, are still a rapturous blue – not a color  you really
want to discard). But some pictures simply beg for black-and-white.
This was one of them…
Nikon D3, 70-200mm lens
Posted by Kevin at 7:33 AM No comments: 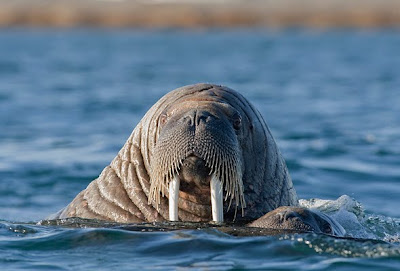 Female Walrus and Calf, Svalbard
I have never had an opportunity to photograph wild walrus in the water like this, and it was challenging: the boat was bobbing around in the surf, and the walruses popped their heads up unpredictably - and briefly. This was the only shot out of many that made eye contact, was sharp - and had a level horizon!  Walrus were exterminated from Svalbard a century ago, but are returning now in ever-greater numbers thanks to legal protection and strict visitor guidelines.  Seeing them like this was a treat.
We are now sailing south towards Norway - and the darkness. It has been one continuous sunlit day for nearly three weeks now. The change will be a relief.
Nikon D300 with 300 f2.8 lens and 1.4x teleconverter
Posted by Kevin at 11:21 PM No comments:

From the Far North

Polar Bear on Ice, ca. 81 degrees North, Svalbard
I am mid-way through a trip through Arctic Svalbard, and this is the only chance I’ve had to log on at this latitude.  Fascinating trip – and shocking. The sea ice that normally cloaks this archipelago is at the lowest extent for August that I have seen in 25 years, an ominous sign for polar bears like the one we encountered yesterday (above). Most bears here now have been forced ashore by the retreating ice, onto land that offers them nothing in terms of nourishment.  I will write more when I get a chance. 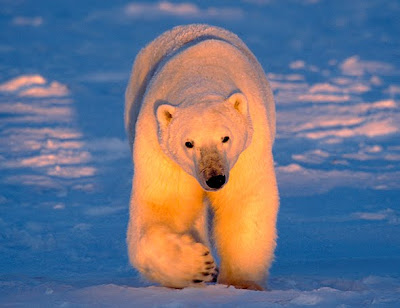 I leave tomorrow for three weeks in Svalbard in the Norwegian Arctic,
serving as lecturer aboard the National Geographic Explorer.  Word has
it that they have been seeing large numbers of polar bears on the ice
this year, despite the dramatic reduction of icepack throughout the
Arctic ecosystem. It will be great to see bears again, and to better
understand how they are adapting to changing conditions.
I will try and post pictures and comments from the field, but –
surprise, surprise –  internet access is apparently pretty challenging
at 80 degrees north. (Maybe that’s a good thing…)  In any case,
I will certainly post whenever I can, or else I will save my comments
until I reach more hospitable latitudes. Stay cool.

Back to the Elwha 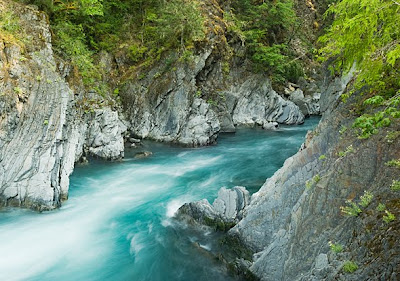 I spent the day today on the Elwha River, hiking in to this spectacular gorge, which lies less than a mile upstream from one of the two lakes - and dams - slated for removal next year, restoring the river to something like its natural state.  Dam removal will take three years to complete - and untold years to evolve after that.  I hope I live to see the river reborn - and salmon once again moving upstream for the first time in 100 years.

In the meantime, I'm off tomorrow for the high Arctic and will likely not be able to post anything for up to three weeks. Hopefully, I'll have a few pictures to share when I get home, however... 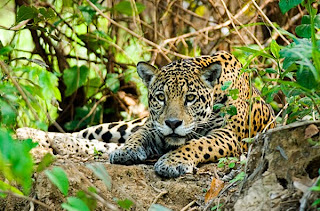 Also, look at the Pantanal trip offered by Terra Incognita Tours here.
Posted by Kevin at 8:39 PM No comments: