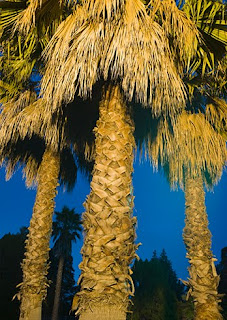 Pictures are everywhere…even in parking lots.  I was in California
this past week, learning to cook Thai food (even photographers
need a hobby) but that doesn’t mean I didn’t bring a camera along.
Here, in the middle of the city, I still found myself looking for natural
subjects and one evening stumbled onto these palm trees lit by a
streetlight just at dusk. The contrast of the golden light and the blues
of the dusk sky were irresistible. Natural or artificial?  Who cares?
Photography is about light, and discovery, and occasionally, just
pure visual fun.  I will spare you the pictures of my Tamarind Prawns,
even though they came out great.
Nikon D700, 35-70mm lens, Gitzo tripod
Posted by Kevin at 10:41 AM No comments: 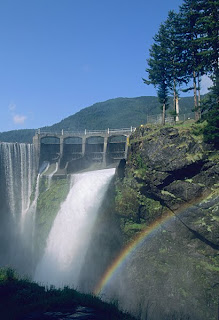 For more information on this story, go to Elwha
Posted by Kevin at 9:48 AM No comments: 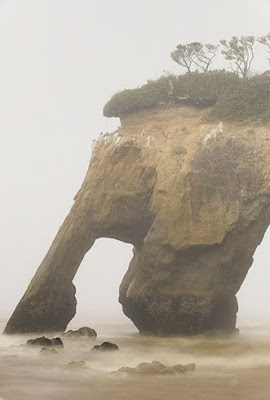 Elephant Rock, Washington
I feel a little guilty. The rest of the country is sweltering and I’ve been sitting in the fog, wrapped in fleece. Seattle is having very unfamiliar 80-plus temperatures all this week, but just two hours away, on the outer coast, it’s freezing. I got up well before dawn this morning to be in position for sunrise on this handsome rock off the Olympic Peninsula, with dreams of warm, dawn light. Not a chance. Four hours later, I was still fog-bound. Nice to be there, of course, and yes, there is a certain mystery to fog. But the flat, colorless sky was not what I had been hoping for. Weather is always a crapshoot: the sun was out all day just up the coast. Guess I’ll have to try this puppy again; someday I’ll get the picture I’m after...!
Meanwhile, take a good look at the spectacular cover story on underwater caves in this month’s National Geographic. There are some stunning pictures there – and some terrifying ones – a fine piece of work by Wes Skiles, a man who dedicated himself to documenting, and protecting these unique environments. Look at the pictures, and then reflect on the man: Skiles was killed just this week in a diving accident. It is a terrible, and untimely loss.
Nikon D3, 70-200mm lens, 15 second exposure
Posted by Kevin at 6:59 PM 2 comments: 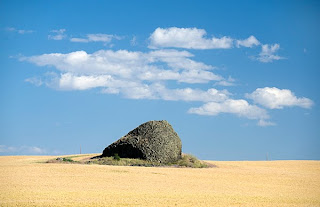 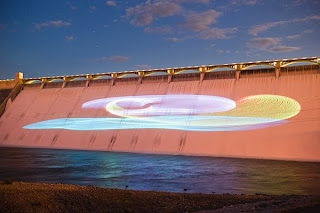 The Gift of Light 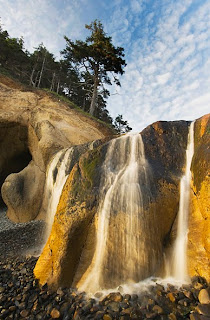 Waterfall on beach, Oregon Coast
It was supposed to rain last night, but on a whim I staked out a spot on the coast where a small seasonal waterfall drops directly onto a cobble beach. It was a place that I had always wanted to photograph, but had never been nearby in the right weather, or at the brief time of year when the water flows. Happily, the clouds opened up briefly in the last afternoon and I got a couple hours of increasingly warm light until the weather arrived in earnest.

Even still, I'm not wild about anything I got here, to be honest.  Nice light, nice little cascade, but overall, an awkward setting. The fact is, not every natural landscape makes for a terrific picture. It may have all the elements, but still not lend itself to a compelling composition.

I may try this spot again some time to see if a different angle, tide or weather can make something happen. Either way, it was still a lovely evening in a beautiful place.