In the tropics, the sun doesn't linger at the horizon at the end of the day : it plunges down as if in a hurry for tomorrow. It's dark by 7, and inside the forest, much earlier than that. So what is a wildlife photographer to do for the next 12 hours until dawn?  Well, last night I went in search of a mythical, and endangered, frog - the Waterfall Frog.  OK, the official name is the Torrent Treefrog (Litoria nannotis) but that seems to suggest that this frog has something to do with trees.  No, this little fellow lives only in waterfalls in small streams and only in Northern Queensland Australia.  Happily there was a location just a few miles from where I am, so I thought it might make a pleasant way to spend an evening.

When I say these guys live in waterfalls, I mean that quite literally; they're not in the rocks and riffles along the way - they live in cracks alongside, behind and in actual falling water. Oh yeah, and they're only active at night. 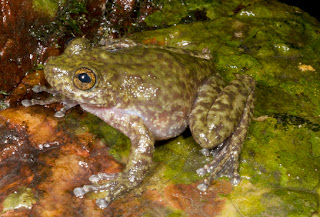 In the end, we found them, right where they were supposed to be, and with waist-deep water, leeches, rain, spray and a very active frog - let me just say it was not dull.  I'll let you know if it was worth it when - and if - I can dry out my camera, strobes etc.