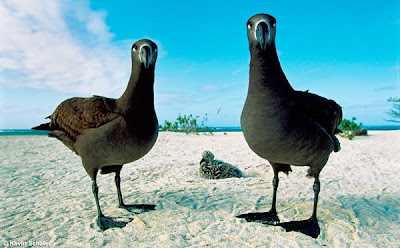 Black-footed Albatross family, Midway Atoll
The July issue of Outdoor Photographer has a story by Kim Castleberry about my work with endangered species worldwide :


http://www.outdoorphotographer.com/locations/international/most-wanted.html
I provided a number of images for them to choose from but was surprised - and pleased - when they chose this shot of nesting albatrosses on Hawaii's Midway Atoll for the opening spread.  It is a picture that I took nearly 15 years ago and have always liked for its intimate low angle. The truth is, wildlife pictures are nearly always more effective if you are shorter than your subject (or in this case, laying down..)


Although Black-footeds are often seen in migration off the California coast, they nest primarily on the remote leeward islands of Hawaii. One of the smallest Albatrosses (even with a seven-foot wingspan) this species is endangered by marine pollution and the continuing slaughter wreaked by long-line fishing.
Posted by Kevin at 4:55 PM